So Long September! September just seemed to fly by! I did get a lot of reading done this month but I hope to get more done in October.  My TBR list just keeps growing and growing.  Here's the wrap-up! ~~~~~~~~~~~~~~~~ Click on the title to read Plot Monster reviews.  Books read this month: The Dire … END_OF_DOCUMENT_TOKEN_TO_BE_REPLACED

We would love to know what you are reading this weekend. Thanks to the The Fiction Cafe - Book Club (on FB) for such a wonderful idea. Rules are simple! 1. Post your current read in text in comments including book name, author and blurb (in same post). 2. Like anyone's comment if you have … END_OF_DOCUMENT_TOKEN_TO_BE_REPLACED 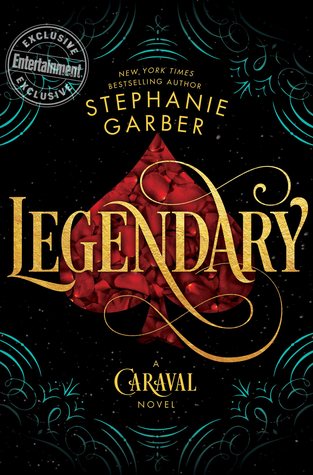 Early in 2017, Stephanie Garber’s YA fantasy novel Caraval left many readers wanting more. Today it was announced that Caraval’s sequel Legendary will be released released May 29th, 2018 by Flatiron Books. I’ve not yet found an official summary of this book but be sure to follow author Stephanie Garber (@SGarberGirl) on Twitter for future updates.

When I’m not writing, I teach creative writing at a private college in Northern California, where I’ve been known to turn assignments into games and take students on field trips that involve book signings.” -from Garber’s website http://stephaniegarberauthor.com/

Blood Match, a new thriller by Don Massenzio is currently a candidate in the Kindle Scout Program.

What is the Kindle Scout Program?

A Little about the book:

Intelligence analyst Jake Balrich boards his Monday morning flight, as he has so many times, for routine field work. When the plan lands, a passenger fails to wake up. Jake soon realizes that the death was not accidental and that the murderous plot was meant for him.

The situation soon spins out of control with Balrich running for his life trying to prove his own innocence as he struggles with an unknown enemy that seems to guess his every move.

I snagged this from Howling Libraries who snagged it from   Kourtni Reads.   1. a really hyped book that you’re not interested in reading   2. a series you won’t start/won’t be finishing The Inheiritance Cycle by Christopher Paolini.   3. a classic you’re just not interested in     4. a genre you never read Manga - … END_OF_DOCUMENT_TOKEN_TO_BE_REPLACED

***Image courtesy of National Novel Writing Month.*** "National Novel Writing Month (NaNoWriMo) is a fun, seat-of-your-pants approach to creative writing.  On November 1, participants begin working towards the goal of writing a 50,000-word novel by 11:59 PM on November 30. Valuing enthusiasm, determination, and a deadline, NaNoWriMo is for anyone who has ever thought about writing a … END_OF_DOCUMENT_TOKEN_TO_BE_REPLACED

Review of A Court of Thorns and Roses by Sarah J. Maas.

Review of Hunted by Meagan Spooner.