Kitty Hawk and the Curse of the Yukon Gold is the thrilling first installment in a new series of adventure mystery stories that are one part travel, one part history and five parts adventure. This first book of the Kitty Hawk Flying Detective Agency Series introduces Kitty Hawk, an intrepid teenage pilot with her own De Havilland Beaver seaplane and a nose for mystery and intrigue. A cross between Amelia Earhart, Nancy Drew and Pippi Longstocking, Kitty is a quirky young heroine with boundless curiosity and a knack for getting herself into all kinds of precarious situations.

After leaving her home in the western Canadian fishing village of Tofino to spend the summer in Alaska studying humpback whales Kitty finds herself caught up in an unforgettable adventure involving stolen gold, devious criminals, ghostly shipwrecks, and bone-chilling curses. Kitty’s adventure begins with the lingering mystery of a sunken ship called the Clara Nevada and as the plot continues to unfold this spirited story will have armchair explorers and amateur detectives alike anxiously following every twist and turn as they are swept along through the history of the Klondike Gold Rush to a suspenseful final climatic chase across the rugged terrain of Canada’s Yukon, the harsh land made famous in the stories and poems of such writers as Jack London, Robert Service and Pierre Berton. It is a riveting tale that brings to glorious life the landscape and history of Alaska’s inside passage and Canada’s Yukon, as Kitty is caught up in an epic mystery set against the backdrop of the scenery of the Klondike Gold Rush.

Kitty Hawk and the Curse of the Yukon Gold is a perfect book to fire the imagination of readers of all ages. Filled with fascinating and highly Google-able locations and history this book will inspire anyone to learn and experience more for themselves as Kitty prepares for her next adventure – flying around the world!

Kitty Hawk and the Curse of the Yukon Gold by Iain Reading has 262 pages and was originally published in 2012 by Amazon Digital Services.

Thank you to the author, Iain Reading, for generously providing a copy of this book in return for an honest review.

Kitty Hawk and the Curse of the Yukon Gold is a fun interesting novel, probably best suited for middle-grade and teen readers.  It has a great “girl power” theme that I think will resonate well with young ladies learning to find confidence and believe in themselves.

This book is well-written and edited.  It has short chapters which I think is great for younger readers.  There are also lots of educational facts and maps included in this book to help keep younger readers engaged.

Overall, I felt that this was a very good book and I would be interested in reading the other books in this series.

Kitty Hawk and the Curse of the Yukon Gold is the story of a young pilot named Kitty.  She has her own plane and has set out on an adventure to study humpback whales off of the coast of Alaska.  Somehow, she becomes involved in an adventure with several handsome brothers, a crazy miner and a whole lot of stolen gold.

The cover of this book is not one that would have grabbed my attention.  Nonetheless, I think that it is a fitting illustration for the novel.

Initially, I thought the book started off slow.  This book is filled with tons of educational information which I think is a fitting contribution for this particular audience.  However, for some readers, it may grow a bit tedious in regard to the flow of the story.  The plot did become more exciting as the story progressed. Once the true adventure began, it was a fast, easy read and I felt reluctant to put the book down.

In other reviews I have seen where reviewers felt that Kitty’s character behaved a little immaturely for her age.  On one hand, I agree with that.  However, I think that her behavior could be realistic for someone who has led the somewhat sheltered life that this character has lived up until this point.

The ending wrapped the story up nicely.  The initial mystery was resolved while leaving the reader wanting to know more about the characters.

The Next Book in the series: 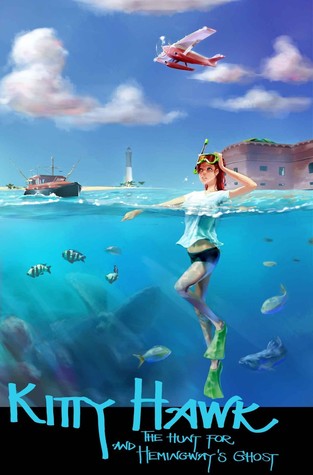 I LOVE this cover!

Is this something you would read?