Search for Maylee by Did Oviatt has 225 pages and was published in 2017.

Oviatt does an amazing job of weaving both suspense and romance in her new release, Search for Maylee.  Initially the writing reminds me somewhat of Mary Higgins Clark – the Queen of Suspense- and that is a remarkable testament to the talent of Didi Oviatt as a relative newcomer to the literary world.  The simplicity of her writing style, smooth and fluid, draws the reader in and keeps the pages turning to the very end.

The only problems I found with this book are relatively minor compared to the overall work.  First, there were a few spelling and grammatical errors.  However, the story is so well-written they are hardly noticeable.  Second, there is a particular scene at the end of the book that I would have liked to see a little more detailed because it results in serious consequences for a major character.

While Search for Maylee deals with deeply disturbing subject matter, it is a light, easy read.  I enjoyed reading this book and I absolutely recommend it to fans of mysteries and thrillers.

I just kept seeing this book everywhere.  I was hearing such great things about it so I knew it was a must read for me.

Maylee has been missing for three years.  The police have “shut the case” and are no longer actively working on finding Autumn’s niece.  Autumn has her own suspect and decides to take things into her own hands.  As her search for Maylee progresses, Autumn learns that things, and people, are not always what they seem.

I thought this was a well-written book with plenty of twists and turns.  I’m not sure if it is in the works or not but I would like to see a sequel to this novel.  While the ending ties most elements up nicely, I believe there is still more to this story. 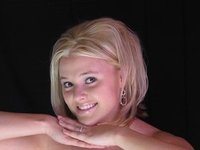 “Growing up in a small town had more than several advantages and disadvantages. Saying that my childhood was sheltered is nothing short of an understatement. Unlocked doors, cleared streets, and the quiet of a trustworthy neighborhood were all welcomed features of my hometown. As a small child I baked cookies with the old lady down the road. I sat next to my kindergarten crush in sun day school, and literally rode my bike in the middle of the road without a care in the world. We didn’t have what kids have today. We actually had to use our imaginations to have a good time. There were no smart phones, tablets, or 64s to keep us occupied. We were perfectly content to play with our stick guns and a water hose for hours on end… And I loved it! Along with my scrapes and bruises I also maintained a simple, happy for the little things attitude, and of course a great tan.

Now that I have made my childhood out to be nothing but cherries and smiles, I have to point out the disadvantages that came with the small town upbringing– before the world of electronics took over the young mind. One word distinctively comes to mind… Boredom! As I grew into adolescence I no longer cared much for silly toys, dancing, baking, or crafts. I rebelled like many young adults do. With a severe chip on my shoulder and a lack of coordination in the sports department, I spent the majority of my time partying. Nothing too outrageous, mostly close friends, fires, and beer.

As much as I would love to say that living in a small town gave me an overactive imagination and love for books, that is unfortunately not the case. I cared more about having a good time than I did about school. I was voted wild child twice in high school. I cheated my way to passing grades.

It wasn’t until I was settled and married with a child on the way that I found my love for the literary world. Rearing out of my mid twenties left me a bit more mature, having to find more important things to do with my time than re-occurring nights at the bar. This is when it started – I read one book after another for a few short years, then decided to give writing a bash. I’m completely amazed at the love I developed! Once I started putting the world of imagination that has long been trapped in my overactive mind into a keyboard, the transformation of self began. A new aspiration in life has formed. I want nothing more than to be known as the unexpected novelist who took the literary world by storm!

My novels include three stand alone thrillers, Search For Maylee, Aggravated Momentum, and The Stix. I’ve released the start to a YA dystopian trilogy New Age Lamians (books 2 and 3 are intended to be released in 2018). I also have a few short story anthologies, Time Wasters, and The Suspenseful Collectionpartnered with Kim Knight.” -https://didioviatt.wordpress.com/

Have you read anything by Didi Oviatt?  What did you think?

16 thoughts on “Search for Maylee”