From beloved award-winning actor, Neil Patrick Harris, comes the magical first book in a new series with plenty of tricks up its sleeve.

When street magician Carter runs away, he never expects to find friends and magic in a sleepy New England town. But like any good trick, things change instantly as greedy B.B. Bosso and his crew of crooked carnies arrive to steal anything and everything they can get their sticky fingers on.

After a fateful encounter with the local purveyor of illusion, Dante Vernon, Carter teams up with five other like-minded kids. Together, using both teamwork and magic, they’ll set out to save the town of Mineral Wells from Bosso’s villainous clutches. These six Magic Misfits will soon discover adventure, friendship, and their own self-worth in this delightful new series.

The Magic Misfits by Neil Patrick Harris has 224 pages and was published in 2017 by Little, Brown Books for Young Readers.

When I first saw this book I knew it was a must-read.  I love the cover design.  This is definitely a book that would catch my eye in a bookstore.  The premise is cute and who doesn’t love Neil Patrick Harris?  So, when I saw it at the library I picked it up right away.

The Magic Misfits is a very entertaining middle-grade fiction book.  It is the story of a group of young “misfits” that set out on an adventure to stop the villainous Bosso.  However, it is also a story of self-discovery as they learn to see the value they posses as individuals.

I love the narration and the magic tricks that are detailed in this book.  I think that young readers will love this aspect as well.

I have seen this book compared to the A Series of Unfortunate Events series multiple times.  I get that.  It does have a bit of a Lemony Snicket feel to it.  I have also seen it described as a “middle-grade Six of Crows.”  I can also understand this comparison.  I think both descriptions are appropriate and this did not deter me as a reader.  In fact, overall, I found The Magic Misfits to be a thoroughly enjoyable read.

I would definitely recommend this book to young readers who enjoy adventure stories. 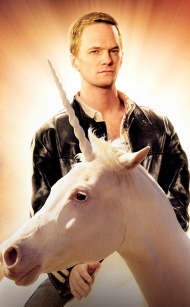 “For me, magic can be a story, a game, a puzzle, or a surprise that takes my breath away in a single, furious gulp.”
― Neil Patrick Harris, The Magic Misfits

“For years I looked for you. I never gave up, but I never imagined that fate would bring you to Mineral Wells.”
“Not fate,” Leila said. “Magic.”
― Neil Patrick Harris, The Magic Misfits